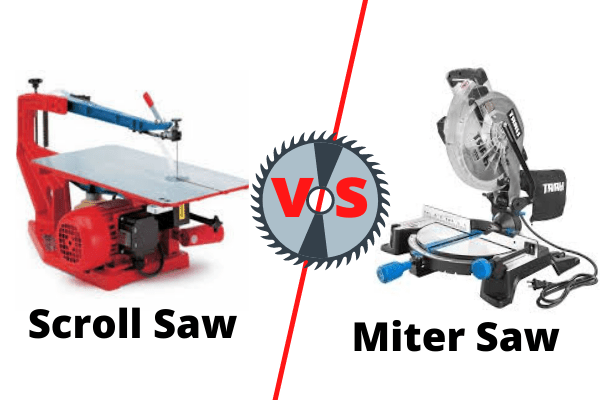 Making intricate and angular designs on wood is impossible with just a hand saw, a backsaw or a bow saw—you need something more. Powered gadgets like scroll saws or miter saws spring into action when you are aiming to make some complex wood-working designs.

But how would you know which one to buy? You first need to understand the features of these two different saws and analyze the purposes they serve. When it comes to scroll saw vs miter saw, each stands shoulder-to-shoulder with the other and will not back down no matter what!

This article will walk you through the descriptions of each, followed by an at-a-glance comparison chart to assist with your purchase decision. Let’s read more to find out what sets the two apart!

A scroll saw is quite popular for its multifaceted usability. It is useful when you are looking to make intricate designs on your wood-panel, metallic surfaces, and other materials. The blades of a scroll saw are quite fine making them fit for making patterns, designs, wedges and whatnot.

The name ‘scroll’ has derived from the traditional use of the word that basically meant to make sculptural art and crafts. A scroll saw does not utilize a continuous loop, contrary as to what many may believe. Instead, scroll saws make use of a reciprocating blade, that is replaceable and attachable via a pre-drilled hole, therefore you would not need any entry slots in order to produce precise interior cuttings.

The tooth count of the scroll-saw blade and its razor-sharpness make them the best fit for getting those intricate designs that you have been looking for out of minimal effort. Not only that, but most brands of scroll saws come with some extra perks—take the lamp and dust blower for example.

The lamp attached to the extendible arm of the machine allows illumination in a dimly lit workshop especially if you are planning to work on a DIY project after dark. The dust blower is an amazing addition too—it comes with a pipe and a nozzle that blows air at different pressure intensities to keep your work area neat and tidy.

Also, the table attached to the machine can be tilted, thus you can make angular cuts quite easily.

Scroll saws come in various shapes and sizes. One type is termed as the ‘parallel arm’ where motor devices are attached near the back of the saw arms in such a way so that the two arms are always positioned parallel to each other.

Another scroll saw design has a C-shaped arm, where the blades exist between the two ends of the C. Brands like DeWALT and Hawk use parallel scroll arms that run on motor to make short but complex designs on wood.

The throat-size of the scroll saws are what sets them apart from one another. The throat is the distance between the blade and the back-frame of the saw.

Costlier versions of scroll saws minimize vibration to the lowest therefore a great favorite among woodworkers. Scroll saws are best for cutting intricate curves and joints into timber, and they can produce extremely accurate measurements, the reason why woodworkers simply adore scroll saws and like to keep one in their collection.

Kerfs of scroll saws are almost invisible therefore giving an extremely fine and flawless output to any furniture item or show-piece. Scroll saws are relatively slower and use smaller blades, that’s why they are reasonably safer than other saws.

Scroll saw blades also come with two-way teeth placement, also known as reverse tooth blade, where the teeth face both upward and downward, therefore cutting at both upstrokes and downstrokes.

Spiral blades are also available where the blade teeth are exposed on all sides, followed by diamond blades have a diamond coating for cutting finely through the glass.

Blades sizes vary between sizes 10/0 and 12, so you can make hand-crafted jewelry and also make intricate cuts on lumber.

The reverse tooth blade technology reduces splintering, though not bringing any huge improvement on saw-dust collection. Reverse tooth blades are perfect for cutting through plywood or softwood.

The latest addition to scroll blade collection, is the ‘ultra-reverse’ tooth placement style where 4 or 5 teeth are facing downward, followed by a similar number of teeth facing in the opposite direction. This ultra-reverse tooth positioning plays an effective role in reducing saw-dust accumulation while wood-working.

These powered gadgets are mainly used for molding and trimming–thus they are quite light-weight and portable, with the blade sizes ranging between 8 and 12 inches only.

How does it make those beautiful angular cuts, you ask? Miter Saws make use of circular saw blades, that rotate in a more controlled motion onto timber. The tool comes with a standard by-default cutting angle of 90°, that could of course be changed to however you may please.

The machine comes with a feature called ‘fence’ that helps the blade into making angular cuts with a thorough precision, by keeping a close harmony between the plane of the blade and the plane of the longest edge of the wooden-panel.

Not only that, but a special feature that distinguishes miter saws from other saws is the ‘miter index’ that it comes equipped with. The miter index will allow the craftsman to change the angles of the blade with respect to the fence, maintaining a perfect balance.

The incremental changes of the angular degrees is by 1°, and not only that, but anytime the woodworker changes his decision regarding the size of the angles, he can quickly make use of the ‘stop’ feature on the miter index that enables him to go back to the more standard angle cuts, such as 15°, 30° or 45° anytime he pleases.

They could be powered, compound, dual-compound, sliding or laser ones. If you want to make straight cuts with a 45° angle, powered miters are the best—they are perfect for making straight cross-cuts at different degrees of angles.

If you are looking for more flexibility when it comes to obtaining your desired angle—compound miter saws might be your thing. In these, you can tilt the cutting blade thus making ramp angles and bevel cuts easily obtainable.

In a dual-compound miter saw, the blades rotate to both the right and the left, therefore you would not need to reposition the timber to get the cuts that you need—imagine the time and labor you would be saving as a result.

Finally comes the laser miters, whose popularity is rising as we speak. Goes without saying, the saw blade of these saws come with a disc-shaped washer that lets out a laser beam as a guidance for cutting.

The blade guard is a highly important feature that covers the teeth of the rotating blades, and in most brands, they are self-retractable., meaning when the saw is lowered onto a wood-piece, the guards automatically expose the blades, and as soon as the saw is raised from the lumber, the blade guard falls back into place covering the blade teeth.

The blade guards are paramount at preventing kick-backs, protecting your hands also from any kind of accident. Next comes the dust bag, that connects to the saw directly, collecting all powdery dust during the cutting process.

The miter table that comes with the machine is usually 24” in diameter, therefore if you are aiming to cut longer wood pieces, make sure there are supporting wood-pieces underneath, and also clamp the wood-piece tightly on either side to save yourself from potential kickbacks.

Miter saws are quite low-hazard—thanks to the ‘fence’ feature that holds the work-piece tightly as the saw-head moves, thus making retaliation almost impossible.

The movement of the saw head is another feature that sets miter saws apart from others—the head is at first drawn back, lowered, and finally forwarded so that kickbacks are unlikely to occur.

Miter saw are light-weight and small in size, therefore highly portable. Additionally, as miter saws cut from a higher point, therefore the user does not need to worry about adjusting the blade depth.

Miter indexes prove to be extremely handy at making angular cuts, and anytime the user changes his mind, the by-default angles could be reset quite conveniently.

However, to point out, dust removal capability of these miter saws is not satisfactory. While making bevel cuts, these miter saws tend to have wood-chips and saw-dust flying about in all directions—therefore cleaning up after becomes a cumbersome necessity.

The blades of miter saws are between 10”and 12”, constructed with steel of a high carbon content, with some brands containing a finished coating to make cuttings more effortless.

Miter blades are great for short cross-cuts, but not long rip cuts. The kerf, hook angle and number of teeth on the blades are clearly labelled. Miter blades usually have 24 to 100 teeth, the higher the number the finer the cut, but lower the speed of cutting.

Another feature to consider before purchasing one is the arbor bolt, that holds the blade to the saw. The size of the blade hole and the diameter of the arbor bolt must harmonize so that the blades remain secured tightly in their position. If the blade hole size is 12”, then the machine requires 1” arbor hole; for 10” blade holes, 5/8” arbor bolts are needed.

To ease your decision making in purchasing the appropriate saw that will meet all your requirements, a comparison chart is given below.

Scroll saws are amazing when it comes to making intricate designs onto a piece of wood. Miter saws are great at making angular cross cuts. Depending on your needs, you should make your purchase decision. This article on scroll saw vs miter saw will surely help you is making the right choice.

Hi! I'm James D. Miller, a professional pro woodworker, have 10 years of experience as a woodworker and 12 years of expertise as a saw user. I've revealed this power saw review site for you guys who have a genuine interest in power tools. Thanks for showing your affinity for the review blog. Find me on Twitter here. Happy reading.

Hello, and welcome to Nextsaw.com. Our vision is to become the #1 resource hub comparing any other websites among the saw tool community within 2025. We cordially invite you to check out our unbiased reviews and blog posts. Stay tuned..